The village Oyndarfjørður is famous for its two rinkusteinar, or rocking stones. You can see these two large boulders nestled by the shore on your way to Oyndarfjørður village. At first glance, there is nothing unusual about them, but look closer and you will see that they are in constant motion, rocking back and forth (to the rhythm of the waves) with the ebbing of the sea.

This strange phenomenon has been a cause for much wonder and no little praise, and how the rocks have not eroded themselves away with this endless rubbing remains a mystery.

Legend has it that a local sorceress put a spell on two pirate ships which robbed the locals. Her spell turned the ships into the terminally rocking stones we see today. 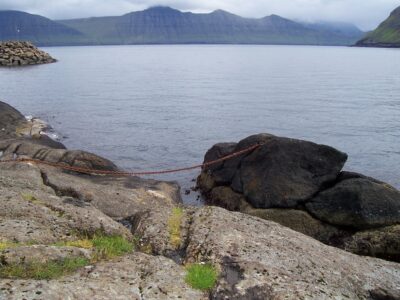