Drawing by an unknown artist from the book Norske Løve by B. Filholm

Die Nordische Löwe (The Norwegian Lion), also known as Norska Løva and Norske Løve, was a large, three-masted frigate with 36 cannons belonging to the Danish East India Company. On 4 December 1707, Norska Løva departed from Copenhagen headed for Trankebar in East India. Trading voyages of this kind were lengthy, sometimes lasting up to two years. The ship had a crew of 120 men and carried large sums of money, along with wine, beer and spirits.

In the early stages of the long voyage, Norska Løva was accompanied by the warship Sophia Hedevig. Entering the North Sea, the ships were hit by rough weather and lost contact with each other. Norska Løva stuck to its course, and by 18 December it had passed the northern tip of Scotland. Sailing west of the Hebrides, lightning struck the ship, killing one man and injuring three. The storm intensified, tearing up all the sails and causing leaks in the ship’s hull. Later the same day, a massive breaking wave wiped everything off the deck, including 14 crew members, who were never seen again.

Norska Løva floated aimlessly in the sea for days until it eventually drifted into the Kalsoyarfjørður fjord in the Faroe Islands. The crew dropped the anchor but the anchor ropes broke, causing the ship to drift further, eventually crashing into the shore in Lambavík bay on New Year’s Eve. Many people gathered to help rescue the crew and salvage valuables from the wreckage. One hundred surviving crew members were brought to safety. 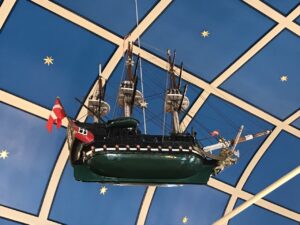 On 3 January 1708, a new storm erupted, and what was left of the ship was obliterated by the huge waves crashing onto the shore. There are also tales of a massive landslide covering the wreckage. These tales are, however, disputed as they are not mentioned in the official inquiry, nor are they mentioned in a popular Danish-language folk ballad about Norska Løva, which is said to correspond accurately with the events outlined in the official inquiry.

Some of the items recovered from Norska Løva have been preserved until today. The best known of these is the ship’s bell, which hangs in the cathedral in Tórshavn. Also on display in the cathedral is a model of the ship, which is said to be built by a member of the crew. Thirteen of the ship’s cannons were also recovered. Some of these cannons are on display at Tórshavn’s Skansin fortress.

Tales of the large frigate have been a source of fascination for many, and a great deal has been written about its last voyage. Parliamentary records from the years after the ship’s disappearance include the official inquiry along with details of disputes regarding the theft of money from the ship and legal proceedings regarding salvage money, etc. The Norska Løva folk ballad mentioned above is believed to be written by a member of the crew, as it appears to be based on the document used in the questioning of the crew during the official inquiry. In addition to the ballad, countless myths (link), scientific studies and avid speculation, Jógvan Isaksen’s crime fiction novel Norska Løva touches on a number of unanswered questions regarding the ship.

Numerous search operations have been launched to look for remains of Norska Løva, but the results have been scarce. Three largely fruitless search operations near the bottom of the bay indicate that the remains did not drift from the crash site further into the bay. Some have suggested that the remains may lie above the screen where the ship is believed to have crashed. A more likely location, however, is at the sea floor near the Linnirygg ridge (see map). Pale rocks are visible in this part of the sea. In 2008, divers brought up two of these rocks, which geologists found to be non-Faroese granite. The size was similar to ballast rocks, and subsequent georadar analyses revealed some unusual patterns on the seabed, but no further investigations were made.

It can seem remarkable that so few wreckage remains have been recovered. Although the ship was demolished, the remains must be located somewhere at the bottom of the sea – especially cannons, coins and other metal objects which could not have been carried with the current. With the latest search technology, it should be considerably easier to find the remains, but these operations require a great deal of work and, not least, funding.

Many people would dearly like to see a new search operation involving all the latest technology so that what remains of Norska Løva can recover at long last.