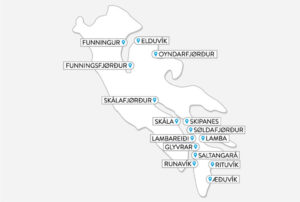 Runavík Municipality is the third-largest municipality in the Faroes and is comprised of these 15 villages.

Name: Eysturoy, (East island) is the second-largest island in the Faroes.

Heights: The highest peak is Slættaratindur 880m (2,887ft), which also is the highest mountain in the Faroes.

Status: Self-governing region within the Kingdom of Denmark

Language: Faroese. Danish has equal status in all official affairs

Main industries: Fishing and aquaculture, shipping and offshore services, tourism and prospects for petroleum in the Faroese area