Stories say that Ormur used this heavy stone to measure his strength. Its estimated weight is 800 – 1000 pounds and is located above the village Skálafjørður.

The legend about Ormur, a notoriously savage farmer who lived in Skála, is a well-known tale in the Faroes and one of the most brutal ones. It is unclear exactly when he lived, but ruins from his house are still visible.

Ormur (meaning ‘Worm’) was a big and strong man, who owned much land and many sheep. He is said to have stolen sheep from neighbouring farmers because he refused to eat his own. One of these farmers was Pætur, from Funningur. Like most people, Pætur was scared of the big farmer from Skála. One day, noticing that Ormur was trying to steal one of his sheep, Pætur timidly walked away, pretending not to have noticed what was going on. But Ormur spotted Pætur and caught up with him. With axe in hand, the brutal farmer made Pætur swear never to tell anyone about what he had witnessed.

A while later, walking from Strendur to Funningur, Pætur passed Ormur’s house in Skála. Not wishing to offend the feared farmer, he stopped by for a visit. Ormur, who was drying corn by the open fireplace, welcomed Pætur with a grand meal of sheep’s heads, a Faroese delicacy. But Ormur had forgotten to chop off the ears from the sheep’s heads, and Pætur recognised his marks on the ears. Pætur lost his appetite and told Ormur that it is hard to eat one’s own meat, especially when it has been stolen. This infuriated Ormur, who took his axe and began to sharpen it by the fireplace. Desperately trying to find a way out, Pætur used a tabletop as a shield and eventually managed to escape. On his way out, he knocked over the wooden stand with the corn, which fell into the fireplace. Ormur chased him for a while but stopped when he noticed that his house was on fire. When he returned, the house was burnt down to the ground.

On another occasion, Pætur once again saw Ormur trying to steal his sheep. Again, Pætur fled and Ormur followed. Approaching Pætur’s home village of Funningur, Ormur knew he would be outnumbered by the locals, so he gave up the chase. 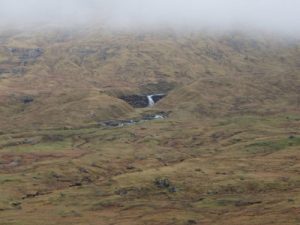 Another farmer, Jógvan from Oyri, once also caught Ormur trying to steal his sheep and attacked him. Having miraculously overpowered the big brute and holding him down, he told his son to hand him his knife. But his son, filled with fear of the savage farmer, ran away and found a hiding place at the nearby Tippafossur gorge. Fearing for his life, Ormur is said to have promised the devil a piece of his little finger if he could help him escape Jógvan’s grasp. Suddenly gaining strength, Ormur broke free from the chokehold and killed Jógvan. Shortly after, he found Jógvan’s son who suffered the same fate as his father.

Returning to his residence, Ormur was exhausted and quickly fell asleep. With a qualm of conscience, he called out in his sleep: “The clothes lie under the corn and the bodies under Tippafossur”. His farmhands overheard this and went looking for the clothes and bodies. Having found them, they informed the authorities of their findings.

Ormur’s trial took place at Stevnuválur, the local Thingstead in Eysturoy. Pætur, the farmer from Funningur, was present, but he dared not answer any questions since felt obligated to keep the oath he had given Ormur. Ormur was sentenced to death, but when the sentence was announced, he managed to flee on a horse. However, the horse collapsed on its way up the hill, and the feared farmer had to continue foot. A man carrying a knife caught up with him at Selatraðskarð. He threw the knife at Ormur and severed his Achilles’ tendon. The giant farmer was caught and executed. He was buried at Stevnuválur, which has a view across the entire area where he had committed his crimes.