Enjoy hiking along the old village path from Oyndarfjørður to the charming village of Elduvík.

The route starts at the old store in Oyndarfjørður. Walk 50 metres towards the school building, turn left and walk about 500 metres until you come to a sheepfold at the top of the village. There, where the path turns to the right again, go into the outfield. Walk about 100 metres uphill to the stone wall on your right and then turn left following the path. After a few minutes you will reach the cairns.

Once you have walked about one kilometre you will come to Elduvíkslíð, the grassy sloping hillside between the two villages. To the left you will see the mountains Middagsfjall and Tyril, and to the right you have a fine view to the north of Kalsoy. Note specifically the two  characteristic peaks, the jagged Nestindur and the somewhat flat Borgarin, creating a wonderful harmony together.

It was in the area below Nestindur that Páll Fangi hid from authorities in the 1600s, because he was wanted  for murder. Páll was a farmer’s son in Mikladalur.  A maid on the farm was in love with him, but the feelings weren’t mutual. The jilted maid took revenge by insinuating that Páll had murdered his father because the father had given the farm to his brother. Páll was convicted of murder and imprisoned in Tórshavn, but he managed to escape from prison three times. On one of the occasions, he hid for a whole year in a cave in the rugged area under Nestindur.

The terrain in Elduvíkslíð is rather steep, but the path is good. Further on, you have a view of the small village of Funningur that lies wedged between the high mountains on the other side of the fjord. One of them is Slættaratindur, which – with its 880 metres – is the highest mountain in the Faroe Islands.

After about three kilometres, the lovely village of Elduvík appears ahead. Elduvík is an ancient settlement. It is not known exactly how old it is, but according to historical documents it dates back to no later than 1350 -1400, but it may well be older. Elduvík has retained much of its old, charming characteristics.

In the old days, there was no church in the village, and therefore all important religious ceremonies, including funerals, had to take place in Oyndarfjørður. When you arrive in the village, you see a flat rock on
the right side of the road. It is called Líksteinur (Corpse Stone). This is where the people of Elduvík said farewell to their loved ones before their coffin was carried to Oyndarfjørður. The first church in Elduvík was established in 1951.
At the western end of the village, there is a magnificent gorge called Elduvíksgjógv, which is worth a visit. 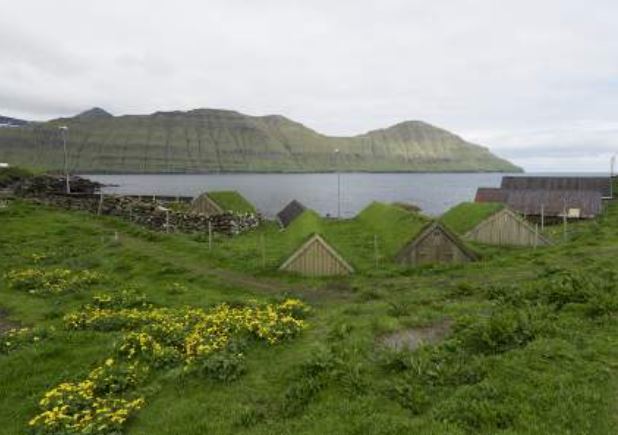